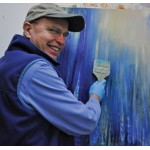 David Allen Dunlop is a modern-day old master whose luminous paintings draw from both Renaissance techniques and contemporary science.  His paintings have been shown internationally and are held in the collections of major corporations including Aetna Insurance, Citibank, Delta Airlines, GE Capital Corporation, IBM, Mobil and more.

David is the engaging host and writer of the 13-show national PBS television series, “Landscapes Through Time with David Dunlop,” for which he won an Emmy and a CINE Golden Eagle Award in 2009.  “Landscapes…” is being shown internationally and returned to U.S. national television May 2013.  A second series is in production.  The series are directed by Connie Simmons and produced by SimmonsArt; the first was co-produced by Connecticut Public Television.  David is also the instructor in a multi-DVD series on painting landscapes produced by Connie Simmons/SimmonsArt.

David’s work has been reviewed extensively and he has been featured in The New York Times.  Near to home, David has frequently been juried into the prestigious Art of the Northeast USA.  At this competition, in 2007, David and his son Max Dunlop won the Revington Arthur Award, and in 2004, David won the Jens Risom Award.  In 2000, New York City selected David to paint a fiberglass cow for the Cow Parade; it was one of the few selected to be auctioned.

David graduated Phi Beta Kappa from the College of Wooster, Wooster, OH, and was honored as a Distinguished Alumnus in 2011.  He earned an MFA from The Pratt Institute, NY, NY.  He is on the faculty of the Silvermine School of Art in New Canaan, CT, where he teaches, lectures, gives workshops and leads groups to Italy, France and Japan.  David lives in Wilton, CT, with his wife, Rebecca Hoefer.

To take David Dunlop's workshops, click on the workshops listed below.

Sorry for the inconvenience.

Search again what you are looking for